This is one of my favorites. If you have never gone, give it a try. Always lots of flea marketers and usually two or three dealers set up inside. Its always a nice ride down to the southern tier with the fall colors beginning to appear. My wife even likes this one!

Get the details here: http://www.arast.org/index.php?option=com_content&view=article&id=4&Itemid=6 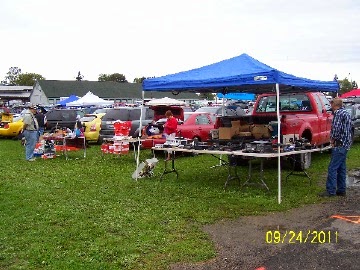 WE NEED ADDITIONAL VOLUNTEERS FOR THIS SUNDAY'S ROCHESTER MARATHON!  Please consider signing up, first come first served (and include your t-shirt size) http://bit.ly/raramarathon2014

SPECIFICS:
Timeline:
7:00 AM – 2:00 PM
Plan:
A minimum of twenty (20) ham operators are needed for this full day event consisting of a half and full marathon run. This event starts and ends at Frontier Field in downtown Rochester. Radio operator volunteers will be stationed at water stops along the course.  Provide safety communications for participants by summoning EMT’s, as necessary, via Net Control.  Specific tasks include; safety communications on footpaths, staff communications, relay team safety, and transport communications.  Since some portions of the course are often below grade, an antenna with some gain is highly recommended.

IF YOU CAN’T HELP THIS SUNDAY, PLEASE CONSIDER THESE UPCOMING EVENTS TO SHARPEN YOUR DISASTER RESPONSE SKILLS:

Posted by Lakeman at 9:55 PM No comments:

K6H will take place on Sunday, September 28 from 7 AM to 3 PM Pacific time and will operate on 10, 20 & 40 Meters on HF and D-STAR on reflector 12A. The event will also use DARI (Disney Amateur Radio Interconnect) to link the WB6AJE repeater in Los Angeles to Disney/ABC sponsored repeaters in Manhattan - Bristol Connecticut, Washington DC and Orlando Florida. Various IRLP and ECHLOLINK nodes will be available. The event will be coming from the legendary Stage 9 (aka The Seinfeld Stage) on the CBS Studio Center lot in Studio City California. Contacts will receive the limited edition QSL card, attached.

Tom Medlin -W5KUB will be on Stage 9 to interview the participants and bring you the action live. http://w5kub.com/

The PAPA website will also stream video directly from the operating stations, so that you can see yourself contacting the K6H operators.
Check the WWW.PAPASYS.com website for updates.

Posted by Lakeman at 5:30 AM No comments:

Email ThisBlogThis!Share to TwitterShare to FacebookShare to Pinterest
Labels: Events

A strong solar flare is making its way to Earth, but the worst of its power looks like it will barely skim above the planet. A "strong" solar flare that launched off the sun Wednesday afternoon could cause some fluctuations in Earth's power grid and slight disturbances in satellites and radio transmissions on Friday and Saturday.

Major disruptions are not expected, even though the flare was classified as an "X-class" flare, which is at the high end of the solar flare scale. Wednesday's flare followed a weaker flare late Monday.

It has been several years since Earth has had a solar storm of this size coming from sunspots smack in the middle of the sun, said Tom Berger, director of the Space Weather Prediction Center in Boulder, Colorado. The flare on the sun barely hits the "extreme" on forecasters' scale, but with its worst effects missing Earth it is only looking "potentially strong" at most when it arrives at Earth as a solar storm, he said.

New calculations from satellite data show that the worst of the energetic particles streaming from the sun likely will go north or above Earth this time, Berger said late Wednesday.

So while the power grid may see fluctuations because the storm will cause changes in Earth's magnetic field, it won't knock power systems off line, Berger said. It may cause slight disturbances in satellites and radio transmissions but nothing major.


Info from ABC, USA Today, SolarHam.com
Posted by Lakeman at 4:55 PM No comments:

The balloon launched on Friday night around 8pm.

9/7/14 UPDATE from N2NXZ:
Tony,
You probably see the last position on the map.
Bill,VA3XCD came home just in time to grab the signal and gatherthe GPS positions before signal was lost.
The tracker was set to sleep after the first 7 hours,it will resume @ 7:00 pm this evening (9/7) and run another 15-20 hours straight.
Where it ended up is anyone's guess. I think due to the low altitudes,it may have survived the first evening. Should this have occurred, it would have soared double or more of that altitude at sunrise and throughout the following day. So that would mean it very well could be well over the Atlantic ocean and still flying.
The launch went exactly as planned except for the tree incicdents and the GPS glitches.
The 10.135 mhz RTTY beacon should still operate for many more hours,every hour on the hour for 15 minutes. I have been listening every chance possible,nothing heard yet.
Here is the only info left using prediction charts. This will have a Hysplit option where you can see projected flight path.
I would not give up on it yet and still need to notify other operators in the Azores and Europe this morning.
http://spacenear.us/tracker/hysplit_cache/140906-02_184415_N2NXZ7.gif
Feel free to share this information Tony and thanks for the email.
Jim,N2NXZ

(message from N2NXZ)   - NOTE - MOVED TO 8pm Tonight 9/5/14
Hello,
My name is Jim, N2NXZ - located in grid fn13ch / Hilton, N.Y. This is a request to assist for tracking a high altitude balloon scheduled to launch on September 5,2014 @ 5:00pm EST / 21:00 UTC.(May change due to weather or equipment issues) Payload will consist of (2) two separate transmitters in the bands of 70cm and 30m.
The main GPS tracking will be on the frequency of 434.651 mhz (70cm) USB using RTTY 50. Decoding software (below) will automatically select this mode once configured. This data when received will place the balloon`s location on the map specifically for the callsign N2NXZ-7 indicating your callsign as the RX station. http://spacenear.us/tracker/
Decoding software is also specific for tracking and can be found here.
http://ukhas.org.uk/projects:dl-fldigi
This balloon will be designed to "float" and the goal is to cover many miles if everything goes as planned. But this is never guaranteed and the need for ground tracking stations is important. Your help would be greatly appreciated especially in the flight projection between my location,Hilton,NY to the East (downwind). The tracking transmitter will be timed to operate for 7 hours from launch to conserve battery power should it stay aloft in this period. A second transmitter on the frequency of 10.135 mhz (30m) will be used for RTTY beaconing. It will operate once every 15 minutes every hour. Timing could change as it will begin at any given time. We are going to try starting on the hour at launch.
The HF beacon will aid only in locations that tracking may not be available and is of course propagation dependant for certain locations. Due to temperature changes at altitude,frequencies listed can drift dramatically +/-.
My contact information - email: n2nxz@cmsdigital.net.
Tracking software questions or assistance can be found here by simply logging in. No registration required,only the anti spam code and nickname (your callsign is best).
http://webchat.freenode.net/?channels=highaltitude
Progress or discussions related to current balloon activity will be here also. This is much easier for participants to communicate other than individual emails. Some of you are already familiar with this process and this message is general to some who are new to tracking.

Again, your assistance is very much needed and appreciated. Please feel free to pass this information to others that could help.Looking forward to seeing you on the map!