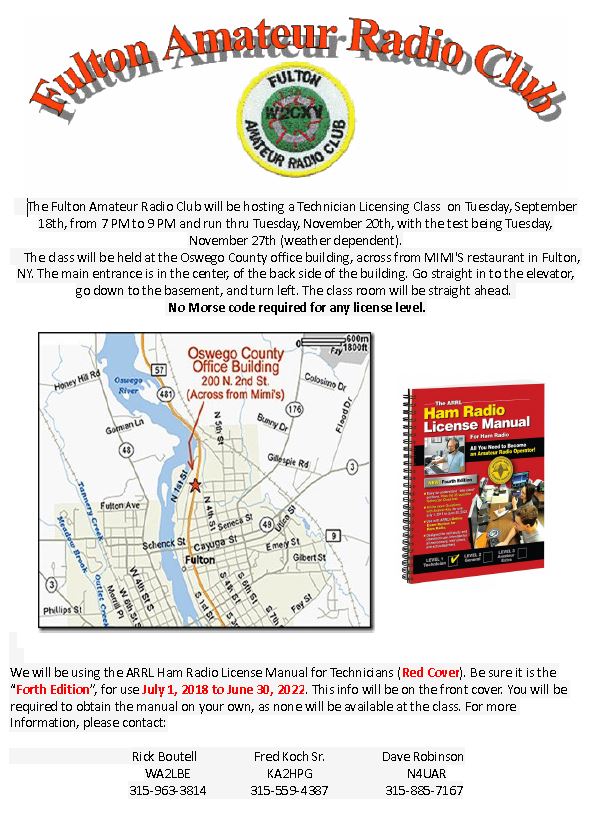 Posted by Lakeman at 6:07 PM No comments: 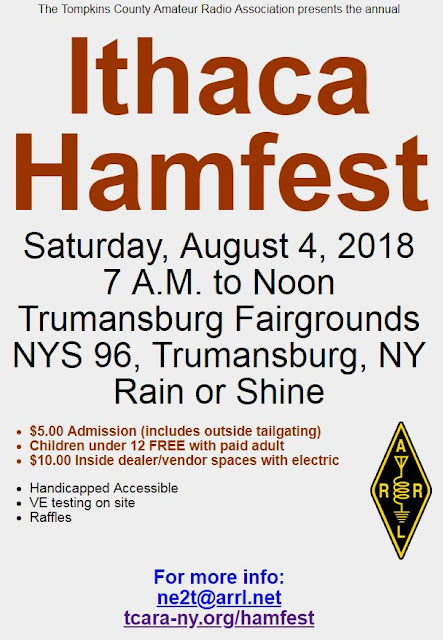 link: http://tcara-ny.org/hamfest/
Posted by Lakeman at 6:31 AM No comments:

I just read on the ARRL website that Radio Shack is opening "Express Stores" in some HobbyTown stores across the country.

I just called Walt's HobbyTown on Dwight Park Dr. (near the John Glenn Blvd. exit off I-690) asking if Walt's would be one of the stores in the chain that would have a Radio Shack department. The person I spoke to said they haven't made a decision but are considering it.

I told him that I'm a ham radio operator and that having a Radio Shack back in Syracuse would be of interest to the many hams in the area. He said that was good information and appreciated the call, that he already received 2 or 3 other calls,  and repeated that they are definitely considering bringing in Radio Shack and are trying to determine if it would be a good business decision.

If other hams from LARC & RACES call, that may help them decide.

Give Walt's a call!

more info at: https://www.dealerscope.com/article/radioshack-looks-to-make-a-comeback-with-hobbytown-deal/
Posted by Lakeman at 5:34 PM 1 comment:


A few years ago the International Association of Lighthouse Keepers decided to have an annual open day for lighthouses all around the world to encourage visitors to visit at their lighthouses. They decided that no better day could be decided upon other than the Sunday of the ILLW. This move has been highly successful as the media have become involved in quite a few of the countries involved in the event. The ILLW takes place on the 3rd full weekend in August each year and attracts over 500 lighthouse entries located in over 40 countries. It is one of the most popular international amateur radio events in existence probably because there are very few rules and it is not the usual contest type event. It is also free and there are no prizes for contacting large numbers of other stations. There is little doubt that the month of August has become "Lighthouse Month" due largely to the popularity and growth of the ILLW.

This year’s event takes place on the 3rd full weekend in August so if you haven’t done so already, find a lighthouse nearby and get a group together or do it solo and fire up a lighthouse station. In most cases if you don’t intend operating from within the lighthouse itself or one of its cottages, you really don’t need to get any approval. Most first time entrants are so enthused with the event that they return year after year. More info at: https://illw.net/

Oswego Harbor Pier lighthouse, Oswego, N.Y. - I have received permission to operate an amateur radio station from the pier of the H. Lee White museum near the Oswego Harbor Pier lighthouse. While I can not operate from the lighthouse yet (construction and restoration in process) I will be as close to the lighthouse as possible. Set up and operation times are August 18th from 8am to 8pm. I will be evaluating set up location and details over the next few weeks. I may set up inside one of the boats from the museum!! This set up will be in conjunction with International Lighthouse / Lightship Weekend and we will endeavor to contact over 500 other lighthouses and lightships with similar set ups all over the world!! See illw.net for further details. From Fred Legawiec, W2LGA (7/10/18)


Check it out and see if you can't contact some of these lighthouses around the world!
Posted by Lakeman at 7:08 PM No comments:

Email ThisBlogThis!Share to TwitterShare to FacebookShare to Pinterest
Labels: Events

Can you help the RAGS Public Service Team?

Please contact K9CHP; Amir Findling at: sarlabs@gmail.com if you can help!

More information and sign-up at: https://ragsclub.org/public-service/
Posted by Lakeman at 8:03 PM No comments: