Only two weeks until the RAGS Hamfest, Sunday July 10th! 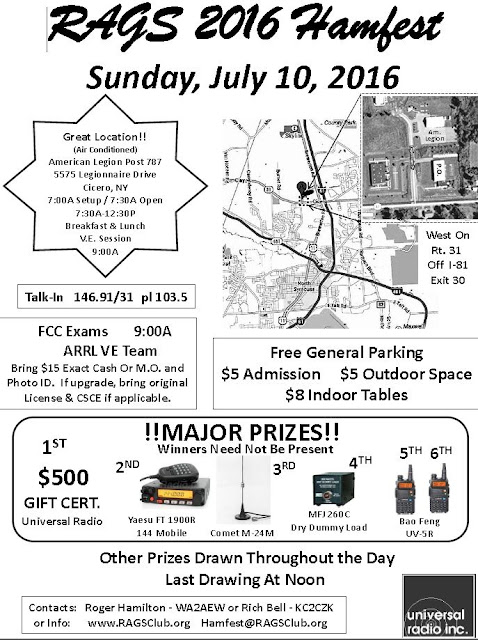 Posted by Lakeman at 7:43 PM No comments: 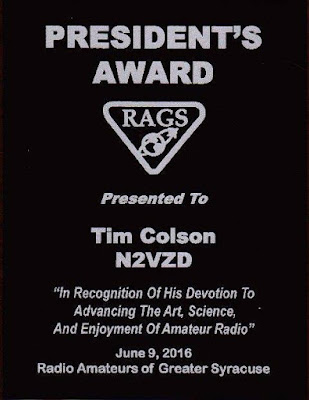 Tim was recently presented the 2016 President's Award by the Radio Amateurs of Greater Syracuse (RAGS).

Tim is one of those guys who gives a lot back to our great hobby! He is always willing to lend his knowledge and experience to Hams new or old. He has been a promoter and constant advocate for getting weekly NET's going almost every night of the week here in CNY. If he isn't running one, he is usually one of the most consistent check-ins! You can find Tim morning, noon or night on the 146.67 repeater in Syracuse.

Thanks Tim for all you do for Amateur Radio in Upstate NY!
Posted by Lakeman at 5:00 PM No comments:

The event takes place August 20-21, 2016. The special event call sign is W2L. It is located at the Oswego Harbor West Pierhead Lighthouse on Lake Ontario in Oswego.

There is more information at the following sites:
Our club website for the event:https://www.fultonamateurradioclub.org/content/2016-international-lighthouse-and-lightship-weekend 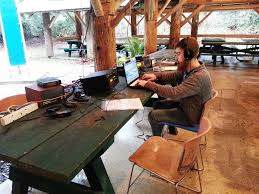 Doug, W2GT is organizing an informal get-together Saturday, July 9th at Frontenac Park in Union Springs.  The plan is to start in the early morning (~9am) set up a portable HF station and have some fun with other hams until probably mid-afternoon, depending on weather and band conditions, feel free to stop in.  Doug and his group are regulars on the Bristol repeater (145.110, pl 110.9) and will be listening there.

Frontenac Park is on the NE corner of Cayuga Lake - take State Route 90 into Union Springs and turn onto Chapel Street to the park, the pavilion is in an isolated area at the south end of the park . Its only 15 minutes from Auburn and less than hour from many areas in Oswego, Ithaca, Syracuse and Rochester. Come on out, meet some nice folks and enjoy some Ham radio outdoors!

Posted by Lakeman at 6:39 PM No comments:

Field Day is coming soon........June 25th and 26th, 2016
If you want to meet some friendly hams or experience some different operating modes, why don't you stop by one of the many Field Day events taking place in our area. You will see various antenna and radio setups along with operators trying to share their knowledge and score some points making contacts through out the weekend.

Its a lot of fun - so we hope to see you out there on field day!
What is Field Day?

Check out one of the following groups: