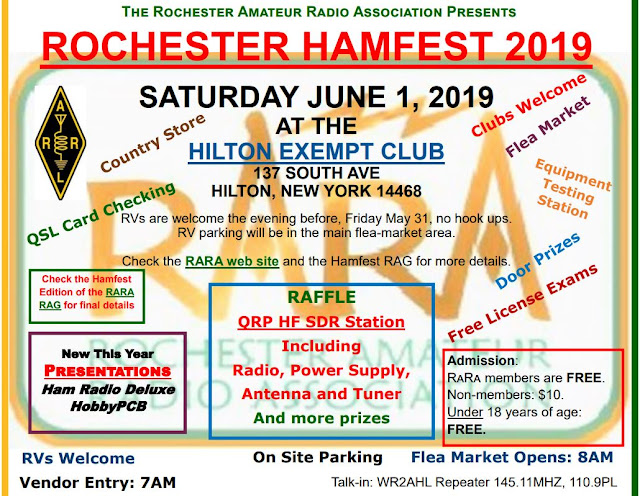 More info at: https://www.rochesterham.org/hamfest.htm
Posted by Lakeman at 9:27 AM No comments:

From the ARRL email notice

Posted by Lakeman at 5:53 AM No comments: 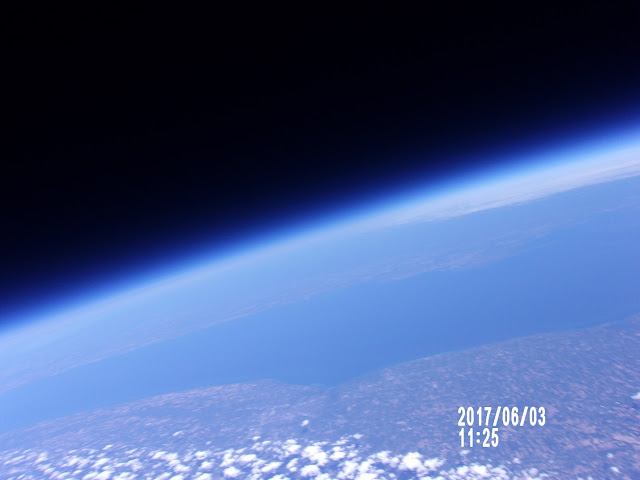 The Amateur Radio Club at Cornell, W2CXM, is planning a high altitude balloon flight on Sunday, April 28, 2019 between 10am – 1pm.   Our Rain Date is the following Sunday, May 5 at the same time.   The picture above is representative of imagery we capture on these flights.  It was captured from a launch we did from the Rochester Hamfest in 2017.  Lake Ontario and Rochester are visible.
This year’s payload will include a typical set of cameras as well as a cross-band repeater, which you are welcomed to try.  The transmit side of the repeater is a very simple VOX activated affair, so you will want to make a moment of noise to wake it up before speaking.

In addition to the cameras and repeater, we will also have a special DTMF activated payload with its own tracker which we will drop on command.  This is just to add some additional fun and technology to the experiment.

We generally launch the balloon somewhere West of Ithaca so that it descends into farm country just Northeast of Ithaca.  It’s a little early to know the exact launch location, but typically it’s in the Dansville area.  Here’s a typical flight pattern, though we won’t know for sure until the day before launch. In this example, the balloon bursts over Seneca lake, at about 100,000 feet, and the payload descends by parachute to land Northeast of Ithaca. 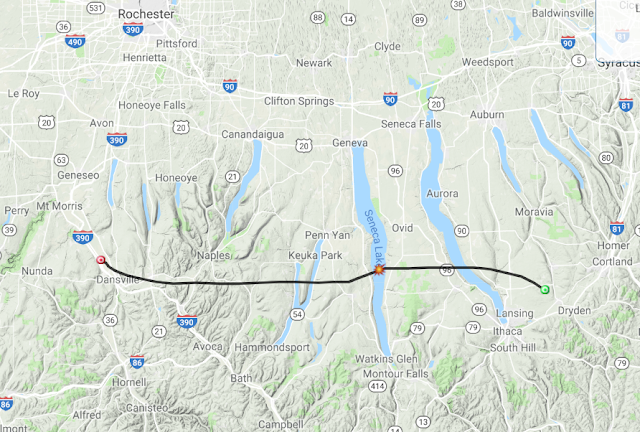 More details for the flight are on our web site, w2cxm.org.  We will continue to update the content there as the flight nears.

......These guys always do some pretty cool stuff! Good luck and Thanks for the update Mike!
Posted by Lakeman at 6:16 PM 5 comments: 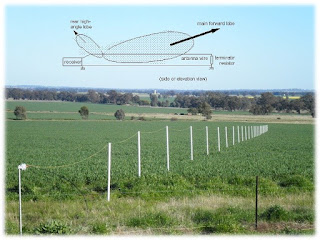 On the morning commute/coffee clutch this morning a few of us had an interesting conversation about receive only antennas. We talked about long random wires strung around the yard and maybe using a chain link fence to support a wire antenna. The topic of the tried and true Beverage antenna also came into the discussion. As we shared ideas I thought we ought to highlight some of  the places to find good information on various receive only antenna options here on UpstateHam.com.

Many of the HF rigs today have a separate receive only antenna port for this purpose. Seasoned DXers will tell you about some nice low noise performance with receive only antenna designs. Many of us also like to experiment with DC to daylight SDR receivers and any/ALL options for the best receive antennas to use with them. I did a brief search for some background and ideas for the best receiving antennas out there. In my search I found some very interesting articles and web pages. Here are a few on-line spots I found that you can start with:

WØBTU Beverage Receiving Antennas
How to build your own one- or two-wire Beverage antennas that work great.
link: http://www.w0btu.com/Beverage_antennas.html

Let us know about your favorite receive antenna at UpstateHam@gmail.com or leave a comment here.
Posted by Lakeman at 9:39 PM No comments:

Results from the 2019 State of our hobby survey

We ran across a link to a survey done by N8RMA on the state of the Amateur Radio hobby. This is a
pretty interesting survey and the results we hope will interest you. The analysis of the results will hopefully give us all something to think about as the wave of technology change continues to influence the world and our hobby.

Check it out and tell us what you think in the comments section below this post! (and share it with others!) ...maybe a topic for a future club meeting or Net.

According to the ARRL news; The fiscal year (FY) 2019 budget — once signed — will include full funding for the WWV stations, which also mark their 100th year this fall. The WWV Centennial Committee has a tentative agreement with the National Institute of Standards and Technology (NIST) to mount a special event station this fall adjacent to the WWV site in Colorado to mark the 100th anniversary of the time and frequency standard station, the world’s oldest continuously operating radio station. A memorandum of understanding is in the works.

Dave Swartz, W0DAS, of the Northern Colorado Amateur Radio Club (NCARC) heads the committee, which is developing plans for an NCARC special event from September 28 through October 2, with a NIST centennial observance tentatively set for October 1. 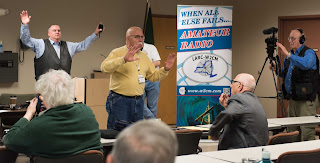 Last Fall, a group from the Liverpool Amateur Repeater Club (LARC) collaborated in developing a comprehensive program designed to showcase the emerging technology behind Digital Mobile Radio (DMR).  We conducted our first full day program, DMR College to the Upstate New York Amateur Radio community in Syracuse this past October.  By all accounts, it was well received and was considered to be quite successful.

Word spread across the region and we were approached by the Greene County ARES group to conduct a similar program in the Catskill Region.  Len Signoretti, N2LEN, worked hard to procure space in the Greene County Public Safety Center, send out the invitations, and coordinate all the details.

(editors note: This is one of our favorite Hamfests in Upstate NY! This club does a great job and always has a very good turn out! If you have never been, we think you should give it a try!) Posted by Lakeman at 5:28 AM No comments: