My Favorite Marsh-Man (from AR Newsline)

11/19/15 -UPDATE from Steve on his day in the Marsh (and the pictures):
So the Marshes-on-the-air (MOTA) was a big success! Thanks to the local community for being so supportive . In total I made 57 contacts on four bands 40, 20, 10, and  6m in the 5 hours I was out. The weather  cooperated with just a few brief moments of drizzle . The furthest contact was Colorado which gave me a signal report of 44 as well as Florida where I received a 56/7 and to the northeast; Nova Scotia where I received a 56 as well . We hit various other states including Michigan , Virginia, New Jersey , Mass , New Hampshire and Maine. Overall we did very well with good signal reports from all . Again this was a lot of fun and I really appreciate all the local contacts and enthusiasm from everyone in the immediate ham community. I can't wait to get out and find some more interesting spots to activate in the future . One final note I wanted to thank my YL for being so supportive and being a good trooper putting up with my quirks with my hobby. This is the second expedition she has gone on with me (IOTA) and I give her a lot of credit for putting up with me and getting out in the field . youtube video of the event: https://www.youtube.com/watch?v=VHHHgX7iIgI

(This story from the Nov. 6th AR Newsline Broadcast - hear it on Monday Night Ham News this Monday on the KD2SL & KC2VER Repeaters in Syracuse) 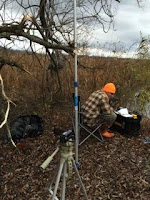 The Hamlin Marsh Wildlife Management Area in New York's Adirondack(?) region holds many things in its vast acreage of wetland: aquatic birds, frogs, deer and various grasses. But it holds something even more for one Syracuse area ham: endless radio possibilities. Amateur Radio
Newsline's Don Wilbanks, AE5DW, has the details:

Since earlier this year, Steven Mussi, KD2ETP, has believed he could enter the upstate New York wetland known as Clay Marsh and find solid footing for a QRP adventure. So Sunday, Nov. 8, will find Mussi canoeing out across the swampy landscape, climbing ashore on some hospitable patch of land, and setting up his Elekraft KX3 and his two antennas.

His one-man special event is called Marshes On The Air. And his goal is to work the bands, starting on 40 meters, logging as many contacts QRP as possible until sundown. He told Amateur Radio Newsline, in a recent phone call, that he has another goal too, one he's had since getting his license three years ago: He said "I want to do some things that haven't been done, to go to places that are kind of inhospitable." 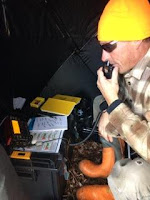 Mussi is no stranger to the wildlife management area near his New York home. He grew up near Onandaga Lake and has been part of an effort to restore its cleanliness. He's also no stranger to off-the-beaten-paths of radio transmitting: Last February, when it was 15 degrees below with wind chill,
he was heating up the airwaves from an ice shanty on that very same lake, transmitting in an expedition he called FLOTA, for Frozen Lakes On The Air.

For Mussi, these outings - like ham radio itself - are about opening up the fun and the possibilities -- options as vast and promising as the airwaves themselves. He says: "Everyone climbs a mountain in some park and that's great, I have done some SOTA work, but I think there are other areas that might be interesting. Going off the beaten path just requires a little more effort." Effort, yes, and a lot more imagination. For Amateur Radio Newsline, I'm Don Wilbanks, AE5DW, in Picayune, Mississippi.

Amateur Radio Newsline™ produces a weekly newscast of interest to radio amateurs worldwide and can be heard on "Monday Night Ham News" on the KD2SL and KC2VER repeaters in Syracuse..
Amateur Radio Newsline™ is a free service to the amateur radio community.  They produce a weekly audio news bulletin called a “QST” or “bulletin of interest to radio amateurs” that is delivered by a downloadable MP3 audio file from our website and over an automated dial-in telephone line.  It operations are primarily supported by voluntary donations from individual amateurs and amateur radio clubs.
check them out at: http://www.arnewsline.org/
Posted by Lakeman at 5:45 AM