Does using your amateur radio in the car qualify as "distracted driving"? 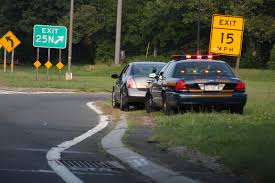 An interesting topic came up on the commute this morning. One of our groups daily Ham radio commuters finishes his QSO with "well I will be taking a standby guys, as I am being pulled over by a NYS Trooper". Then there was silence from our friend for about 10 minutes until he came back with the story. Well, you can almost imagine the story, but he did get a ticket and it brings up a lot of questions. (With that persons permission, we will try to update this article after he goes to court).


After this incident, another local Ham suggested that we might share some of the legal opinions and references on using our amateur radios in vehicles here in New York State.

"Given the concern that many hams have regarding the new “Distracted Driving Law” that went into effect in New York this past July, particularly since the law increased the penalty to 5 points on a license, I recently asked the New York State Department of Motor Vehicles Counsel’s office for an explanation of both the cell phone and distracted driving laws and how they apply to hams.

The opinion, is attached.  I suggest that you read it thoroughly.  It’s very detailed but simply put, it says the following:

Please understand that the opinion carries the disclaimer that it is not binding upon prosecutors, law enforcement, or the judiciary.  You may still be stopped, issued a summons, and have to appear in court to plead your case.  However, the DMV opinion carries a lot of weight and should be used in preparing a defense should you receive a summons

Feel free to print out this opinion, but understand that it is not a license to be stupid!  Let’s hope that you never need to use it." (from the Hudson Division ARRL) 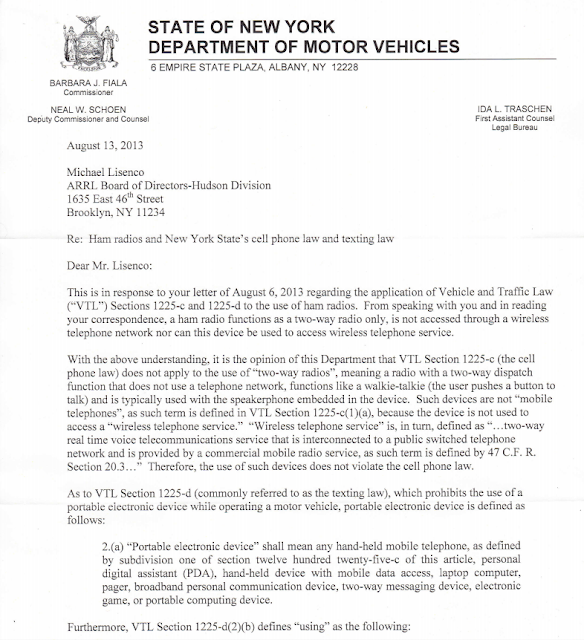 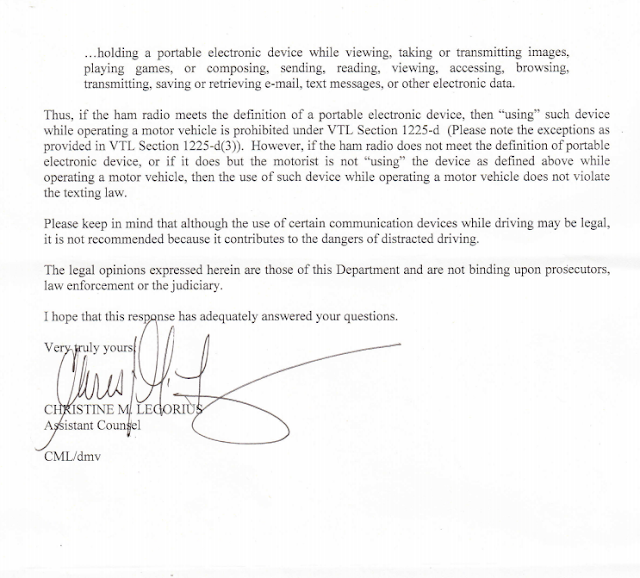 Section 397 of the New York State
Vehicle and Traffic Law


397. EQUIPPING MOTOR VEHICLES WITH RADIO RECEIVING SETS CAPABLE OF RECEIVING SIGNALS ON THE FREQUENCIES ALLOCATED FOR POLICE USE.

A person, not a police officer or peace officer, acting pursuant to his special duties, who equips a motor vehicle with a radio receiving set capable of receiving signals on the frequencies allocated for police use or knowingly uses a motor vehicle so equipped or who in any way knowingly interferes with the transmission of radio messages by the police without having first secured a permit to do so from the person authorized to issue such a permit by the local governing body or board of the city, town or village in which such person resides, or where such person resides outside of a city, or village in a county having a county police department by the board of supervisors of such county, is guilty of a misdemeanor, punishable by a fine not exceeding one thousand dollars, or imprisonment not exceeding six months, or both. Nothing in this section contained shall be construed to apply to any person who holds a valid amateur radio operator's license issued by the federal communications commission and who operates a duly licensed portable mobile transmitter and in connection therewith a receiver or receiving set on frequencies exclusively allocated by the federal communications commission to duly licensed radio amateurs.

In conclusion; it really makes a lot of sense to be informed on these topics in case you are in the position of being stopped while using your amateur radio.


(BTW - I carry copies of my Amateur Radio License, the NYS opinion, and the section 397 V&T law in my glove compartment.)