In the spirit of the best interests of our great hobby, we want to encourage all Amateurs to become informed on the present direction of the ARRL. We believe most folks would agree that the ARRL needs to grow and change with the times. There are growing concerns with the leaderships transparency and their dialogue with members and our elected board representatives. Our intent with this post is to ask that you to become informed. Their are obviously going to be many opinions out there on many of the latest "hot" topics that the ARRL is deciding on.

First and foremost if you are an ARRL member you should try to follow what is going on with the your board and leadership. Their are a lot of decisions and changes being made. Take a look at the ARRL website and understand some of the issues being considered (see info below). Don't be shy to voice your opinion to your ARRL representatives (see the links below).

Board of directors, by-laws and meeting minutes:
http://www.arrl.org/general-information

Also consider some of these links to key concerns of fellow Amateurs on the recent direction of the ARRL leadership.

Some of the issues:
https://www.myarrlvoice.org/the-issues/

CQ’s editorial on the articles and by-law change proposals: 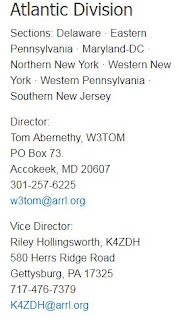 Some letters to the ARRL:

A letter from N6NB:

Members of the Board of Directors
ARRL, the National Association for Amateur Radio
Newington, CT 06111

Dear Members of the Board:

As a former four-term vice director and ARRL member since 1957, I never before
considered submitting a letter like this to the Board of Directors.  However, the
board now faces the most serious threat to its credibility since the incentive licensing
controversy 50 years ago.  In fact, the current crisis is more serious because so
many of those who are concerned about recent and proposed board actions are
prominent and highly respected leaders of amateur radio.

I believe the board must act quickly to reaffirm its commitment to democratic principles
if it is to avoid long-term damage to ARRL's effectiveness and its endowment.

The new code of conduct, which is widely perceived as a gag rule to silence directors
who may disagree with ARRL policy, must be abolished.  It cannot be saved by
wordsmithing or spin-doctoring.  Directors must be free to express their views on
all matters to the members who elected them, even if what they say could be deemed
to disparage ARRL itself. Their primary loyalty must be to the membership.  The code
of conduct is fundamentally at odds with that principle.

Moreover, the board needs to reaffirm its commitment to free elections.  No committee
should be allowed to disqualify board candidates who meet the written qualifications for
the position.  The membership must be free to elect any legally qualified candidate,
regardless of his or her stance on any issue or any undefined "conflict of interest."
A committee that can remove candidates from the ballot with seeming arbitrariness
reminds a lot of us of a "guardian council" that disqualifies potential candidates for their
lack of ideological purity in some countries.  It has no place in a democratic organization.
Equally undemocratic is the proposal to allow ARRL memberships to be arbitrarily
revoked.  That could also be used to undercut free elections.  And the recent proposal
to dilute elected directors' votes by giving a board vote to persons not elected by the
members is still another action that would undermine ARRL's status as a democratic
organization.

Above all, the board must bring sunshine to its governance process. Frankly, during
the many board meetings I attended, too many things happened that would never
withstand public scrutiny.  The minutes rarely provided a complete picture of what
really happened at those meetings.  The best solution is to open board meetings to
any member who wishes to attend.  When ARRL was established and its governing
documents were written to allow closed board meetings, sunshine laws were rare
even for government agencies.  The federal Freedom of Information Act was not
enacted until 1967 and the Government in the Sunshine Act came even later.
Now we live in a different time.  Today the public and ARRL members expect even
private membership associations to be far more open and transparent than they did
when ARRL was founded.

In short, I believe the board must work to restore public confidence by recognizing
full freedom of speech for directors, assuring free elections and opening board meetings
to members.  It's been very heartening to see the huge outpouring of support for an
open and democratic ARRL.  Now the board needs to address these issues.

In addition, the board should reconsider the recent censure of director Norton.  His
alleged offense was nothing more than making members aware of the existence of the
new code of conduct.  After hearing him discuss this issue in two venues, I believe
his presentations were not only accurate but also very much in the best interests of
ARRL and its members.  He deserves praise, not censure, for supporting members'
right to know.

I have been concerned about the ARRL, and its direction, for the last couple of years starting with the, in my opinion, misguided Rule Making in RM-11708, and the Ham Radio Bill (Parity Act) currently awaiting action in the U.S. Senate.  The most recent actions by the present ARRL President and his friends on the Board, and the ARRL CEO (the so called “Code of Conduct” for Directors/Vice-Directors, the unwarranted censure of Director Dick Norton), have really given me reason to be alarmed and to take action.  Now with the changes being proposed to the Articles of Incorporation / Bylaws by some Directors (with the direction of Mr. Roderick), makes me want to say the line from the old Movie: “I am mad as Hell and I am not going to take it anymore!”.

I do not have to go through the arguments for or against any of these proposals – you all know what they are.  The bottom line is that they are all counter to an Organization that should be operated in a democratic way.  These are all things that smack of a Hostile Takeover of the ARRL with the end result of appointing Directors/Vice Directors and others so that the ARRL will be run by a Cabal of power hungry people to the exclusion of the Members who should be able to choose their representatives, and communicate with them without inside threats, pressure, or intimidation.

I make this promise and commitment:  I am rescinding my Legacy Gift, I will make no more donations to the ARRL, unless and until, the present Officer’s are changed.  More importantly, I will make it my mission to talk to ALL of the Legacy Gift Donors and Annual Donors and ask them to cancel their support for an Organization that, in my view, has fallen into disrepute by the actions of a few at the top.