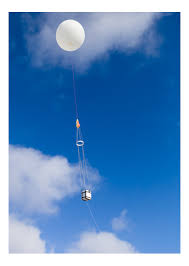 The group is launching a high altitude balloon to near space (100,000 feet) and transmitting photos of the atmosphere during the flight.

The Triple Cities Makerspace launch will take place on June 29th around 10:30 AM, tentatively depending on weather. The balloon will be tracked by amateur radio and also live photos during the flight will be transmitted back to the ground via amateur radio.

The group hopes that many radio operators will participate by listening in and uploading photos they receive to the project’s website: https://reachfornearspace.com/

The flight is expected to last around 2.5 hours and the coverage area of reception within 500 miles.
Gary Dewey, an amateur radio operator (callsign KD2PYB) and member of the Triple Cities Makerspace, is leading the project. “I’ve always dreamt of going to space, but this could be the next best thing – building something that goes to (near) space. I hope this project inspires others to experiment and reach for their dreams.”

Read more at: https://hvdnnotebook.blogspot.com/2019/06/upcoming-balloon-launch-sstv-aprs-from.html
Posted by Lakeman at 9:15 PM