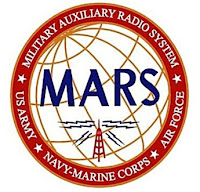 Coming this month MARS (Military Auxiliary Radio System) will be holding its First Quarter 2018 exercise from the February 20th to the 23rd called COMEX 18-1.  Again, I will be collecting county status reports from members within the county and with those around Oswego County.   I will be running a net on the Fulton 147.150 repeater and will be on 60 meters band contacting other amateur operators.  As of right now I am not sure which time I will be on the Air to collect information, I will send out emails and make comments on the Pathfinder Nets leading up the exercise. At the same time collecting weather reports from the local air ports.

In additional we are going to be compiling a new report called SWEAT-MSO, which is like the county status report with a few more sections.  SWEAT-MSO stands for: Sewage, Water, Electricity, Academics, Trash, Medical, Safety, Other.   This is another tool which is to take a snap-shot of the status of local governments and emergency operations.

The exercise from what I am being told will be another kind of world event which there will be a total loss of all services throughout the United States including the local area.  The operation on the first day, February 20th will be conducted by MARS members who have backup (emergency generator or solar) power.  I have both so I will be taking part that day with MARS operators operating during our normal night-time scheduled net.  Also, we are to disconnect our computers from the Internet and the telephone network to simulate a complete loss of communications.  The 20th and 21st are also going to be night-time operations but with communications by Internet, and by telephone networks allowed.   The last day, February 23rd is a full day operation with the DOD (Department Of Defense).

During the last exercise, COMEX 17-4, MARS Region 2 (New York and New Jersey) had 100% reporting of county status reports.  Our goal is to achieve 100% in this exercise as well.

MARS Exercise
from Michael Regan
KD2DVC/AAR2KD
Posted by Lakeman at 7:34 AM

Email ThisBlogThis!Share to TwitterShare to FacebookShare to Pinterest
Labels: MARS