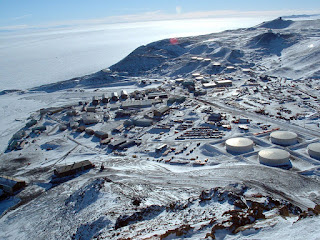 Each year, volunteers at McMurdo Station, Antarctica, celebrate the holidays by serenading those at the remote, Antarctic field camps via HF radio. This year, ham radio operators and SWLs around the world are invited to listen in and email listener reports. The broadcast will be on Sunday, December 23, 2300 UTC [6pm EST] (December 24, 1200 New Zealand Time), on 7,995 kHz USB.


McMurdo Station is a real-life U.S. Antarctic research center on the south tip of Ross Island, which is in the New Zealand-claimed Ross Dependency on the shore of McMurdo Sound in Antarctica.