Listen to VE0JS on her RTW sailing attempt 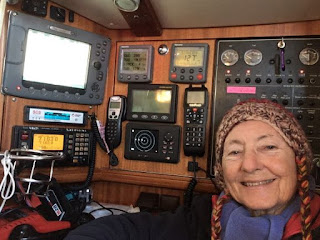 
Jeanne Socrates; VE0JS is about 3 months into her around-the-globe voyage that could set a new world record. The 76-year-old sailor set sail from Victoria BC, Canada in early October aboard her 38-foot sail boat.Jeanne is attempting to the be the oldest person to sail solo, unassisted and non-stop around the globe. She already holds the record as the oldest woman to circumnavigate the globe.

Socrates has made two attempts to be the oldest person to sail alone, but has experienced several challenges during her initial voyages. Well underway on her current attempt, Socrates officially crossed the equator on November 4th and the tip of Africa on December 20th.


If all goes according to plan, Socrates is aiming to circumnavigate the globe in eight months which would bring her back to Victoria in May of 2019. Check out her progress, radio schedule and other trip details on her QRZ link below:

Check out her latest status update on her blog:
https://svnereida.com/blog